Ms. Conway will be joined in the West Wing, steps from the Oval Office, by Sean Spicer, a veteran Washington political operative, who will be the face of Mr. Trump’s administration as its press secretary, the transition team announced.

Along with several other White House communications specialists appointed on Thursday, the pair will wage daily battles with legislators on Mr. Trump’s behalf while seeking to preserve the president’s political power base among voters outside the capital.

Ms. Conway and Mr. Spicer will also be responsible for a relationship with the press corps that has often turned antagonistic. The president-elect’s team has hinted that they may change the way reporters are treated, and possibly eliminate the daily press briefing, after a campaign during which Mr. Trump frequently derided reporters as dishonest.

Ms. Conway, 49, who took over as Mr. Trump’s campaign manager in August, shortly after the Republican convention, guided him through a brutal and divisive campaign, often appearing on television to vouch for him during periods of scandal or controversy.

She stood by Mr. Trump after a 2005 tape surfaced in which he boasted about groping women, proving her loyalty and helping secure her position as someone who will have the president’s ear on a wide variety of topics.

In a statement, the president-elect said Ms. Conway would continue her role as a “close adviser,” responsible for helping carry out his priorities and delivering his message from inside the White House.

“She is a tireless and tenacious advocate of my agenda and has amazing insights on how to effectively communicate our message,” Mr. Trump said. “I am pleased that she will be part of my senior team in the West Wing.”

The new members of the staff will have the power to shape Mr. Trump’s presence in Washington as he makes the transition from businessman to president. The president-elect is also under pressure from his supporters to deal aggressively with the national press corps.

And his political advisers will help guide him through a potentially contentious relationship with some members of Congress, including ones from his own party.

The West Wing sweepstakes has provoked a weekslong roiling debate within Mr. Trump’s circle over who should fill prime posts. It also reflected the president-elect’s apparent dissatisfaction with some of his options for who would appear at the White House podium as press secretary. 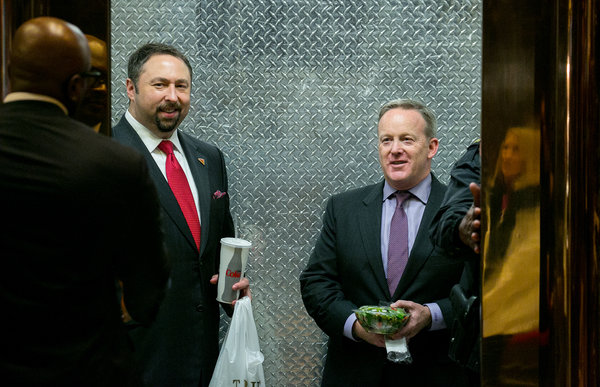 Mr. Trump had hoped to have a woman at least share those briefing duties. But after Ms. Conway declined, Mr. Trump eventually dismissed alternatives that could have signaled a more hostile approach to the press, such as the conservative radio host Laura Ingraham and Kimberly Guilfoyle, a Fox News host and commentator.

Mr. Spicer, 45, is a fierce advocate for Mr. Trump and can be combative with reporters. But he is also a familiar face in Washington, having served for years as the chief spokesman for the Republican National Committee.

His ascension to one of the most visible jobs in Washington represents a victory for Reince Priebus, the chairman of the Republican National Committee and the incoming chief of staff, in internal jockeying with Jared Kushner, Mr. Trump’s son-in-law, as well as with Stephen K. Bannon, who will be Mr. Trump’s chief White House strategist, and Vice President-elect Mike Pence.

Mr. Trump is deeply fond of Ms. Conway, whose job as counselor will give her frequent access to the president. Considered a “Trump whisperer” during the campaign, and someone who was particularly adept at explaining his appeal to voters, Ms. Conway will serve as one of the chief protectors of Mr. Trump’s political brand. She also has been a favorite strategist for other conservative candidates, such as Newt Gingrich during the 2012 presidential race, and she was an adviser to Mr. Pence during his run for governor of Indiana.

She has reportedly clashed at times with Mr. Priebus and Mr. Kushner. Both men were frustrated when she gave a series of interviews in which she criticized Mitt Romney, the 2012 Republican nominee, who was being considered for secretary of state despite having been a key figure of opposition to Mr. Trump during the campaign.

With a soft-spoken approach that has appealed to Mr. Trump, Ms. Conway was credited during the campaign — even by Democrats who opposed her — with smoothing out some of Mr. Trump’s most jagged edges during her appearances on television.

Tending to Mr. Trump’s relationships in Washington is likely to fall, in part, to Bill Stepien, who is in line to be the new political director. Mr. Stepien once played that role as the longtime political adviser to Gov. Chris Christie of New Jersey, but was fired for his part in the scandal involving a plot to punish a Democratic mayor by closing traffic lanes leading to the George Washington Bridge.

Mr. Stepien has been credited by Mr. Kushner and Mr. Bannon, who brought him on board in August, with helping them secure Mr. Trump’s victory in November.

It is unclear how Mr. Trump intends to use David Bossie, who left the conservative nonprofit group Citizens United to be the deputy campaign manager, and was among Mr. Trump’s earliest informal advisers about a presidential run. Mr. Bossie frequently clashed with Mr. Priebus, and Mr. Trump was dissatisfied with him by the end of the campaign. He has sought to be a deputy chief of staff.

One loyal aide who will not be joining the president’s White House staff is Corey Lewandowski, who was recruited to be Mr. Trump’s first campaign manager at the recommendation of Mr. Bossie.

Mr. Lewandowski, who was fired from the campaign early last summer, waged the most visible fight for a role at the White House. In the end, though, he will remain outside the gates, announcing on Twitter on Wednesday that he has set up a Washington public relations and consulting business a block from the White House.

“I will always be President Trump’s biggest supporter,” Mr. Lewandowski wrote in a news release announcing the new business, Avenue Strategies. The co-founder of the firm is Barry Bennett, who managed the presidential campaign of Ben Carson; Mr. Lewandowski brought him onto the Trump campaign after Mr. Carson dropped out.