CBS NEWS STATED The 20-year-old suspect has been identified as Jonathan Xie from Basking Ridge, New Jersey. Was arrested on Wednesday for “attempting to provide material support to Hamas, lying on his application to enlist in the U.S. Army, and making a threat against pro-Israel supporters” the DOJ said in a statement. According proof, the suspect emailed the Al-Qassam Brigades, also known as a military wing of the Palestinian-Arab Hamas terrorist organization, stating that he “reverted to Islam a few weeks ago” and wanted to join a group.

“In April 2019, [the suspect] Went on Instagram Live video wearing a black face mask and stated that he was against Zionism and the neo-liberal establishment. Asked by another participant in the video if he would go to Gaza and join Hamas, he then stated ‘yes, If I could find a way,'” the DOJ stated. In another Instagram post, the suspect wrote: “Okay, so I went to NYC today and passed by Trump Tower and then I started laughing hysterically … sh*t I forgot to visit the Israeli embassy in NYC … i want to bomb this place along with trump tower.”

“Later in the video, [the suspect] displayed a Hamas flag and retrieved a handgun. He then said ‘I’m gonna go to the pro-Israel march and I’m going to shoot everybody.'”

On other platforms, the suspect stated, “I want to shoot the pro-israel demonstrators … you can get a gun and shoot your way through or use a vehicle and ram people … all you need is a gun or vehicle to go on a rampage … I do not care if security forces come after me, they will have to put a bullet in my head to stop me.” Good luck with all that. He wouldn’t make it through the door. There are armed guards in full gear holding Ak47’s. There are armed guards inside and metal detectors. It’s like getting through the airport right when you walk through the door. Safest place to be in NYC. 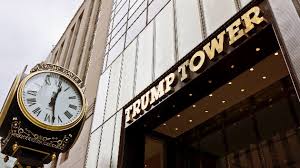 The fool hath said in his heart there is no GOD. Have you ever pondered that statement? It is so obviously true regardless of whether GOD exists or not. Bet against GOD and get proven wrong is infinite loss for eternity. Why take that chance? Open your eyes to this simple, logical statement and then seek GOD out and you will find him. Walk in the path he set out for you and you will be rewarded both in this life with happiness and in the after life.