On Thursday, Lahren took to Twitter to announce her displeasure with the pro-life bill that calls for the end of all abortions even those involving rape and incest.

“I will be attacked by fellow conservatives for saying this but so be it, this Alabama abortion ban is too restrictive. It doesn’t save life, it simply forces women into more dangerous methods, other states or countries. You don’t encourage life via blanket government mandate!” she said in a tweet.

After her tweeting what she did she then got labeled “anti-Christian, anti-family, and anti-freedom.” she then responded with

“If you think banning abortion with no exception for rape or incest will stop women from terminating pregnancy, you’re not being honest with yourself. P.S. you’re not God so don’t you dare evaluate my Christian faith based on your moral superiority complex,” Lahren responded.

Are people agreeing with Lahren? We took it to the streets and this is what people had to say.

I am against abortion, but I also believe that if a women is raped or a woman could die then she should have that right to abort the child. Way before it comes a human being or way before there is a heart beat. I think it is wrong for a female to even think about abortion that hasn’t been raped or been  impregnated by a blood relative, just because they didn’t use protection does not give them the right to abort the fetus.  When there is an unwanted pregnancy they need to raise the child or give it up for adoption, not kill the child, to me that is murder and the woman and the doctor should be charged.

I will agree with Tomi on this one, way to restrictive. No exceptions for rape or incest. I do agree that in today’s world you have more choices to prevent pregnancy. I believe this went too far as did New York’s late term abortion bill. 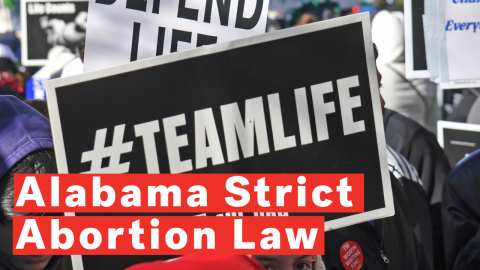 This is NOT an issue of women’s rights! This is an issue of taking an innocent life. Regardless of the circumstances, we as a nation cannot and should not condone the taking of an innocent life. What an individual does IS between them and God, but as a nation, we cannot condone it. If we truly believe in the sanctity of life and teach the world the same, what a change we could make. This issue has always been about one life being more important than another. How many cases of abortion are for rape or incest? Rape and incest make up less than 1% of abortions. Did you know that 75% to 85% of rape victims chose to keep their babies? If we place more value in one life over another, where do we stop? You cannot say you believe in the sanctity of life and then turn around and say, “Well, except in horrendous circumstances.” I applaud Alabama for having the conviction to pass such a law. It’s never easy to do the right thing, especially now in this country!

Watch: Biden Official Gets Absolutely Wrecked By Fox News Reporter, ‘Why Is Biden Bragging About…