Everyone reading this has put their foot in the mouth at one point or another in their life.

It’s something that happens every so often that when you do it any person with sense should be embarrassed.

For example, there might have been a time or another where you were talking about your boss while you were at work when they heard you. It’s that boy is my face red type of moment that makes you hopefully think that maybe you should think things through the next time.

Sometimes that happens when someone makes a declarative statement after the don’t do any research whatsoever. With someone like AOC, it seems that it happens so much that it’s almost easier to keep track of the times that she has said something and it didn’t end up making her look ridiculous.

In a now-deleted tweet on Thursday, Democratic Rep. Alexandria Ocasio-Cortez of New York tried to call out “older male members” of the Republican Party for posing and taking pictures next to a cardboard cutout of her.

The lawmaker in the photo that Ocasio-Cortez criticized, however, was not a Republican. It was Ocasio-Cortez’s colleague, Democratic Rep. John Yarmuth from Kentucky, the chairman of the House Budget Committee. 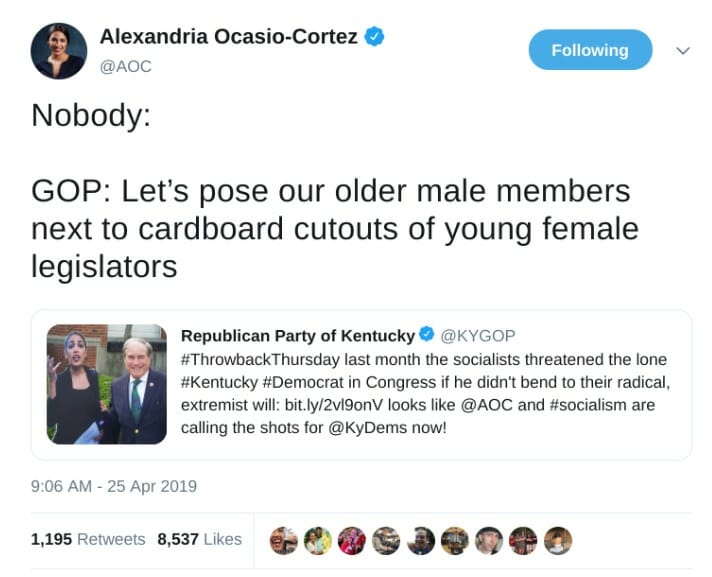 The Republican Party of Kentucky tweeted the photo of Yarmuth standing next to Ocasio-Cortez’s cutout, accusing Democrats of their “radical, extremist will.”

“[L]ast month the socialists threatened the lone Kentucky Democrat in Congress if he didn’t bend to their radical extremist will,” the Kentucky Republican Party tweeted, along with the photo of Yarmuth. “Looks like AOC and socialism are calling the shorts for KYDems now!”

The party’s tweet comes just weeks after the Democratic Socialists of America “threatened to find a primary challenger for the Kentucky lawmaker after he didn’t immediately say he would support Medicare for All,” USA Today reported.

Even though the tweet from the Kentucky GOP labeled Yarmuth as a Democrat, Ocasio-Cortez was quick to call out the supposed “Republican.”

However, after realizing her mistake, people on Twitter were also quick to bash Ocasio-Cortez’s mistake.

The member in this picture is a Democrat…

Biden Just Made History But He’s Furious Over How