With these six most horrifying words, Biden just illustrated that he is about as far left as they come. He could even give Russia a run for its money.

In the past, liberals and conservatives alike were able to agree on the fundamental values in the U.S. Constitution.

Yes, there was no question that the two parties certainly disagreed on what methods were the most useful in achieving the ideals that the Founding Fathers laid out in the Constitution. However, both parties agreed that the Constitution was an extremely important document that would stand the test of time.

It was Tuesday when President Joe Biden made it clear that he no longer holds this to be true, with the six most horrifying words ever.

It was following Supreme Court Justice Steven Breyer’s retirement when Biden was meeting with the Senate Judiciary Committee to discuss this newly-opened seat on the Supreme Court.

“There’s always a renewed national debate every time we nominate…any president nominates a justice, because the Constitution is always evolving slightly, in terms of additional rights or curtailing rights, etc,” Biden said.

Okay, now go back and read that again, paying close attention to these words: “the Constitution is always evolving slightly.” 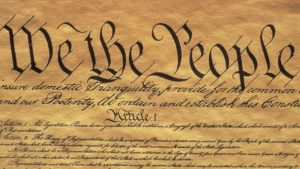 This is the Preamble to the US Constitution,

This is a statement from Biden that represents the tremendous disparity between leftists and conservatives in 2022.

Is the Constitution “evolving?”

It is this belief from far-left liberals that could lead to some problems, because conservatives believe the Constitution is unchanging and non-negotiable. The ideals laid out in this document are the very ones that define who we are as a country.

The late Supreme Court Justice Antonin Scalia was probably the best to articulate this position and what is wrong with it in 2017, according to Fox News.

“The Constitution is not a living organism,” Scalia said. “It’s a legal document, and it says what it says and doesn’t say what it doesn’t say.”

Yes, when the Constitution was ratified in 1788, America was still yet to live up to the ideals that the founders had expressed. The main example of this would be slavery, and it is even probable today that there are certain areas of the Constitution that are not completely fulfilled.

However, this is not the point that President Biden is making. Instead of saying that the United States of America may have work to do to live up to the Constitution, he is saying that this centuries-old document can be changed to fit his own view of what America can be. Yep. Big problems here.

There were some Twitter users who asserted that the U.S. Constitution is an “evolving” document due to the amendments, but yet again, that is not what President Biden is trying to do here.

These arguments represent a misunderstanding of Biden’s words. The University of Chicago Law School notes that the idea of a “living Constitution” means the document “evolves, changes over time, and adapts to new circumstances, without being formally amended.”

That is what Biden is saying here. When he says the Constitution is “evolving,” he does not mean that it can be amended, but that the very content of it should be seen differently as the world continues to change.

Make no question about it, this is based on the leftist view of the world where they believe that objective truth does not exist. In the mind of a leftist, “truth” can be changed over time and can be adapted as people live through different experiences.

This ideology is not sustainable, and any society that does not believe in objective truths will collapse on itself.

So yes, when we say that Biden uttered the “six most horrifying words” of his presidency, we are telling you the truth.

Watch: Antifa Tries Using Flamethrower On Cops But Gets A Swift Dose Of Justice

Another Massive US Company Crumbles After Going Woke